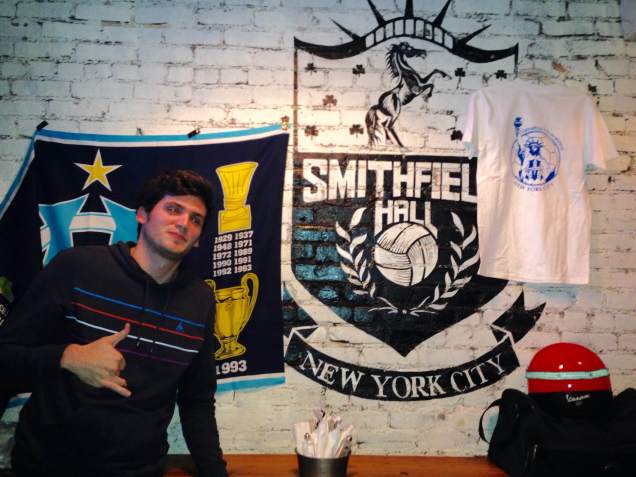 Alex is a member of OMNewYork and is here watching a game at Smithfield Hall NYC.

So Alex, where are you from, and where do you currently live?

I have lived many places in the US and lived in France when I was young. I currently live in Brooklyn.

How did you become an OM supporter?

What is your favorite OM memory or moment?

For me, the last game against Rennes in 2010 and specifically Lucho’s goal. Winning the Coupe de la Ligue a few weeks before, Marseille’s first trophy that I was old enough to remember, the crowds at the Vieux Port, to that goal to win the league, the end of the 2010 season was crescendo of pure joy and pride as a fan.

Who is your favorite OM player (past or present)?

I have many favorite players, but Dédé Ayew stands out. I remember his first appearances with us in C1, the hype after his successful loan to Arles-Avignon then seeing him develop in an amazing player. He was from Marseille, his father was a great player for OM, and he loved the supporters.

My favorite current player is Michy. I am in love with this player and his talent. He is our big hope for success on the field. He will play for a top champions league team soon.

Have you been able to go to le Vélodrome for a game?

Yes, it is a special experience and makes being a fan of OM special. I hope to go as much as possible in the future. However, I have not been since the renovations.

How can OM reach out to and gain more support in the USA?

Unless people have a connection to Marseille, I doubt that they would start supporting them. Unfortunately, American fans are focused on C1 and EPL so the only option is to grow the club in France and qualify for Champions League regularly. In France, only Paris have the resources to reach foreign markets.

Where do you think l’OM will place this year?

Very difficult year for Marseille. We had a terrible offseason, with Bielsa, Imbula, Lemina, Payet, Ayew and Gignac leaving. I do not have faith in the Labrune to make good moves in January. I think the team has the talent for a Europa League spot, so I will say 5th place.