In a gritty, mostly boring game, OM pulled out an unlikely win. Playing very defensively for most of the game, OM relied on Nkoudou to pull out a goal on a counter, as Montpellier applied more and more pressure. This game saw terrible officiating affect OM yet again, in what is seemingly just another day at the office for Ligue 1 officiating. Review/Ratings to follow. 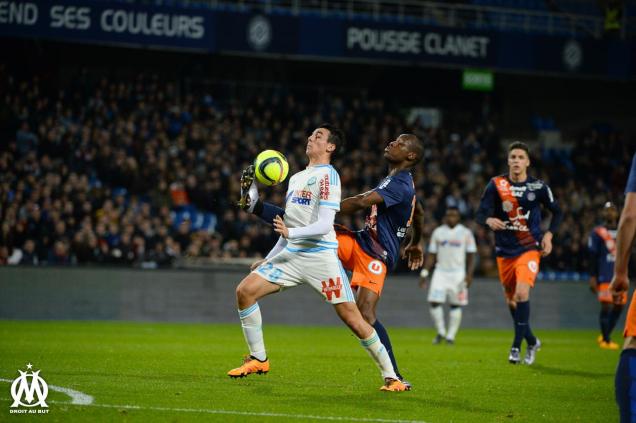 Rabillard in his first start for OM. Photo courtesy of om.net.

Defense played very well today. Mandanda made a couple good saves, but otherwise wasn’t required to do too much. Dja Djédjé had a great game, pushing forward often and saving OM with a slide tackle in the second half. Nkoulou was solid, offering tackles and passing. Rolando had a very strong performance, intercepting many crosses and getting the ball out of danger. Manquillo was more offensive than usual and made few mistakes defensively. The defensive unit today were the only reason OM did not lose 3-0.

The midfield had ups and downs. Isla was okay, offering some good tackles but a bit discreet going forward. Romao had a great game, aggressive on defense and pushing forward well. He should’ve been awarded a penalty when he was brought down in the box in the second half. However, OM fans have come to realize over the past two seasons that Marseille will not be getting much help from the refs. Cabella struggled, failing to connect with Rabillard often and losing possession frequently with his near-constant maradona attempts.

Sarr had a rough game, failing to produce much offense. His set pieces were absolutely terrible, skying a free kick and failing to serve good corners. Alessandrini came in for Sarr and provided solid attacking runs and pressure in the second half. Nkoudou was relatively quiet until he scored. Rabillard was okay, pressuring the Montpellier defense and offering some quality runs. He was subbed out by Thauvin, who 10 minutes later was given a questionable red card for a reckless tackle on Hilton. The reason I say questionable, is that his tackle was very similar to Lyon’s Morel sliding into Sarr two weeks ago. Morel was only awarded a yellow (of course). Honestly, I wouldn’t want half of these Ligue 1 refs officiating an adult league game, let alone professional matchs. Pathetic. 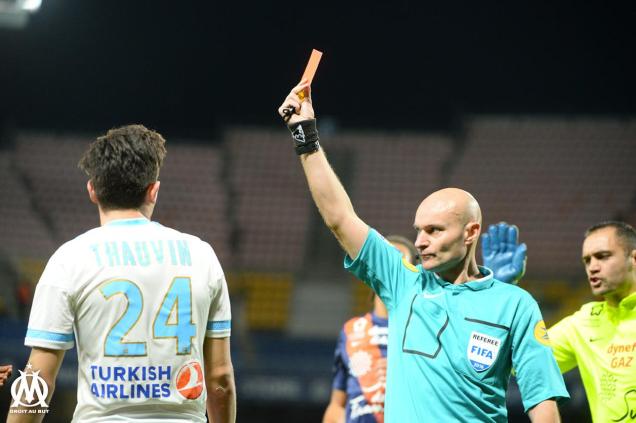 Thauvin being given a red by Chapron. Source – om.net