OM battled and battled against Nice, but ultimately fell due to an error in the last minute. While this game will inspire rage and despair at the result, I found it to be encouraging. This OM side showed remarkable character and ability against a Nice side that included Mario Balotelli and Danté. Both teams mounted impressive attacks, and both defenses were put under immense pressure. The deadlock could only be broken by a Pelé error in the 88th minute that offered Nice the victor. Despite the result, I am feeling more optimistic about OM’s season. Click, “Read More”, to continue. 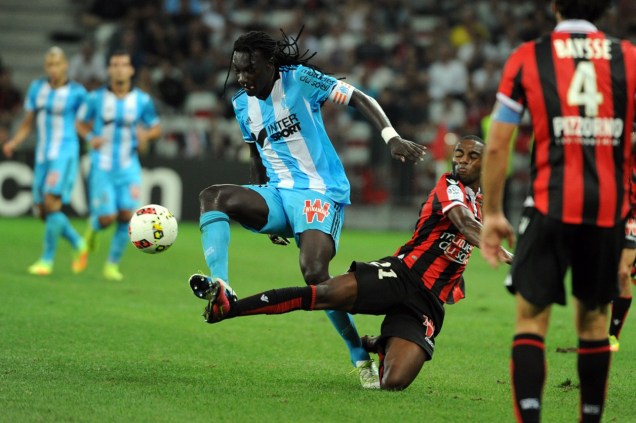 OM’s defense saw highs and lows against Nice. While the unit looked solid on all fronts throughout the game, little errors resulted in big goals for Nice. While the penalty was a bad call, the second Nice goal resulted from Rekik being beaten down the left side, and Hubokan being beaten to the cross by Balotelli. After a solid performance, this breakdown resulted in a devastating equalizer. Then, with a 2-2 tie all but assured, Cyprien unleashed a powerful long shot from 24 yards out. Despite the shot coming squarely at Pelé, the OM goalie was unable to push the ball away. A terrible ending to an otherwise great game.

What a showing from the OM attack! While players like Sarr, Njie and Leya were promising, Florian Thauvin stole the show with successful runs, decent passes, and a great goal to put the game at 1-1. He seems determined to succeed at OM, and truly gives his all on every play. Gomis, while scoring on a penalty and fighting very hard, needs to improve his finishing. Each game this season, the tall striker will find himself with several scoring chances, but hasn’t produced. This will have to change going forward, as OM is going to need every goal they can get to push for an elusive Champions League spot. With the midfield looking stronger and stronger, Gomis could be a force to be reckoned with, this season.

OM must learn lessons from this defeat, and mature. The young players are talented, and will learn how to close out games. However, this team continues to improve with every week. The season is long – and there is plenty of time to build a great season. The first step comes next week, with a big home match against Lyon…